US national security adviser: Qatar and Turkey are new sponsors of radical ideology 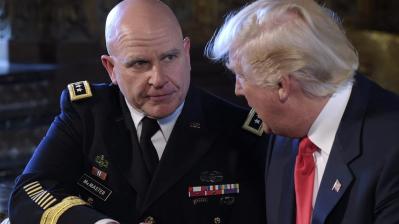 US national security adviser HR McMaster condemned Qatar and Turkey for taking on a “new role” as the main sponsors and sources of funding for extremist Islamist ideology that targets western interests.
“Radical Islamist ideology is a grave threat to all civilised people,” Gen McMaster said.
The US national security adviser said this threat has been identified “myopically” in the past.
“We didn’t pay enough attention to how it’s [radical Islamist ideology] being advanced through charities, madrassas and other social organisations.”
While Gen McMaster made reference to Saudi Arabia’s support for some of these organisations decades ago, he singled out Qatar and Turkey as main supporters at present. “[It] is now done more by Qatar, and by Turkey,” he said.
He claimed Turkey’s growing problems with the West were largely a result of the rise of the Justice and Development Party, to which president Recep Tayyip Erdogan belongs.
In a rare public policy appearance with his British counterpart Mark Sedwill at an event hosted by the Policy Exchange think tank in Washington, Gen McMaster revealed that US president Donald Trump will roll out his latest national security strategy on Monday.
Four “vital national interests” would be prioritised. These are protecting the homeland and American people, advancing American prosperity, preserving peace through strength, and advancing American influence.
Appointed to lead the National Security Council in February, Gen McMaster said the approach would contest three big threats to US interests globally. Two of these have had a major impact on the Middle East.
China and Russia are viewed by the White House “as revisionist powers” encroaching on US allies and undermining the international order. Another tier of danger was described as rogue regimes, such as Iran and North Korea, which “support terror and are seeking weapons of mass destruction”.
The third threat came from extremist Islamist organisations.
Gen McMaster struck a hawkish tone on Russia. He said: “We are facing a threat from Russia that involves also so-called new generation warfare.
“These are very sophisticated campaigns of subversion and disinformation, and propaganda, using cybertools operating across multiple domains that attempt to divide our communities within our nations.”
Gen McMaster called himself a “big fan” of the review conducted by former British diplomat Sir John Jenkins in 2015 about the topic. The review – which the UK government did not make public – is believed to warn of the threat of political Islam.
He added that the Trump administration is committed to countering extremist ideologies and funding and referred to the centre established during the US president’s visit to Saudi Arabia. It is a “big problem when Islamist radical ideology bridges into political Islam,” he said.
While stressing that not all the Muslim Brotherhood branches were alike, he urged to build opposition groups that respect individual freedoms, and in order to avoid another “Morsi model” in reference to former Egyptian president overthrown in 2013. Gen McMaster said that the Brotherhood operated clandestinely and monopolised opposition after the street upheavals and fall of Hosni Mubarak in 2011.
The other model that Gen McMaster identified with the Brotherhood is Turkey’s AKP. “By operating through civil society, they consolidate power through one party, sadly it is a problem contributing to Turkey’s drift from the West” he said.
On Iran, Gen McMaster described the government in Tehran as a “rogue regime also and a revisionist regional power” and said “We need to counter destabilising activity especially in Syria” as well as blocking support for its proxies and its paths to nuclear weapons. He also advocated looking for sanctions outside the nuclear deal, and abandoning the Barack Obama approach that made the deal itself a focal point of the strategy toward Iran.
Gen McMaster ended the conversation abruptly by saying “I have a phone call I absolutely have to take” but only after emphasising that US is not seeking regime change in North Korea.
“That’s not our policy. What we are emphasising is the de-nuclearisation of the peninsula,” he said.

Like Loading...
This entry was posted in Recep Tayyip Erdoğan, Turkey - US, Turkish Developments, Turkish Islamism. Bookmark the permalink.