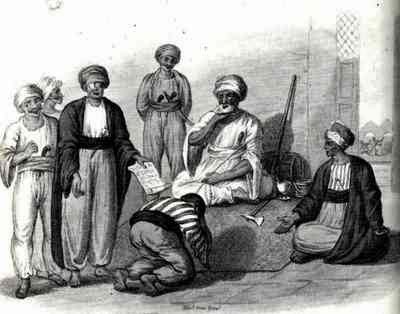 A “dhimmis” is a non-Muslim living under Islamic law who has paid a special tax and agrees to a long list of strict conditions. Rather than tax Muslims, the Western world actually helps support the Islamic religion by granting them TAX FREE status under religious and charity laws.

The Pact of Umar is an important historical document. It sets the legal foundation for the way Muslims mistreat Christians right down to the present time. Even today, Christians are required to pay a safety tax in Muslim controlled nations. Basically Muslims will allow Christians to live in their Muslim controlled cities as long as they live as second class slaves and never openly practice Christianity. The penalty is jail, confiscation of all personal property and children, and of course death. Nothing has changed in 1400 years. In Islamic countries today, audio cassette tapes of Islamic preachers are sold in corner stores. Here are some excerpts from two tapes recorded sometime between 1980-1985 AD. The tapes show that the Pact of Umar is still used today and Christians are viewed as second class citizens. Imaging how Muslims would howl if the West forbade Muslims the right to public worship, demolished their Mosques and seized their houses and cars for simply practicing Islam.

The Status of Non-Muslims Under Muslim Rule

After the rapid expansion of the Muslim dominion in the 7th century, Muslims leaders were required to work out a way of dealing with Non-Muslims, who remained in the majority in many areas for centuries. The solution was to develop the notion of the “dhimma”, or “protected person”. The Dhimmis were required to pay an extra tax, but usually they were unmolested. This compares well with the treatment meted out to non-Christians in Christian Europe. The Pact of Umar is supposed to have been the peace accord offered by the Caliph Umar to the Christians of Syria, a “pact” which formed the pattern of later interaction.

We heard from ‘Abd al-Rahman ibn Ghanam [died 78/697] as follows: When Umar ibn al-Khattab, may God be pleased with him, accorded a peace to the Christians of Syria, we wrote to him as follows:

In the name of God, the Merciful and Compassionate. This is a letter to the servant of God Umar [ibn al-Khattab], Commander of the Faithful, from the Christians of such-and-such a city. When you came against us, we asked you for safe-conduct (aman) for ourselves, our descendants, our property, and the people of our community, and we undertook the following obligations toward you:

(When I brought the letter to Umar, may God be pleased with him, he added, “We shall not strike a Muslim.”)

We accept these conditions for ourselves and for the people of our community, and in return we receive safe-conduct.

If we in any way violate these undertakings for which we ourselves stand surety, we forfeit our covenant [dhimma], and we become liable to the penalties for contumacy and sedition.

Umar ibn al-Khittab replied: Sign what they ask, but add two clauses and impose them in addition to those which they have undertaken. They are: “They shall not buy anyone made prisoner by the Muslims,” and “Whoever strikes a Muslim with deliberate intent shall forfeit the protection of this pact.”

Note: This was a from hand out at an Islamic History Class at the University of Edinburgh in 1979. Source of translation not given.

Like Loading...
This entry was posted in Ethniki Ypoteleia - Dhimmitude, Islam in Europe, Islamism, Persecution of Christians, Turkish Islamism, Uncategorized. Bookmark the permalink.