Yazidis in Turkey on the verge of extinction 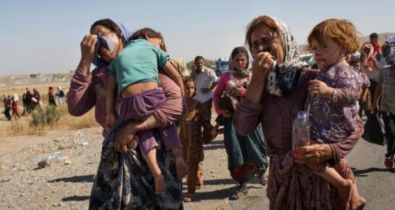 A Yazidi cemetery has been vandalized in the southeastern city of Şanlıurfa in Turkey, the Turkish news site Gazete Karınca reported.

The graves in the Yazidi cemetery of Zewra village were damaged by “unknown individuals” on the night of the referendum on the Turkish constitution, April 16.

The Yazidi Cultural Foundation condemned the attacks in a written statement, saying in part: “Just as ISIS [Islamic State] attacks graves and shrines and exhibits its inhumane character, those who attacked our dead also revealed their own mentality.”

Yazidis, or Yezidis, are a Kurdish-speaking ethno-religious community indigenous to northern Mesopotamia. Their ancient faith, Yazidism, has a rich oral tradition that combines aspects of ancient Mesopotamian religions including Zoroastrianism.

The prominent Yazidi sociologist and the head of the Yazidi Cultural Foundation, Azad Barış, is also from the Zewra village in Viranşehir. Barış said that the Yazidi population in Turkey’s majority-Kurdish regions was only 367 in 2016.

Most predominantly Yazidi villages have now been turned into Yazidi-free zones. What has happened?

The Turkish newspaper Hürriyet conducted interviews with some Yazidis in the region in 2007.

“180 years ago, 400 villages in Suruç, Halfeti, Bozova, Derik, Çınar, and Mazıdağı were forcibly Islamized,” Abdo Barış, 62, said. “Just as there are mosques and churches, we too should have our own temples. But we don’t. They do not allow them to be. Yazidis in the city of Batman tried to have a temple two years ago. The district’s governor allowed it. But the Reşa tribe threatened Yazidis. They said a Yazidi place of worship cannot exist.”

Xefla Bozkurt, 49, said: “Muslims tell us that if we change our religion and become Muslim, we will go to heaven. They promise women for men; and men and financial possibilities for women to make us change our religion. This has always been the same and it will always remain this way.”

According to the Turkish sociologist İsmail Beşikçi, a prominent expert on Kurdistan, Viranşehir used to be a fully Yazidi town.

“During the 1912-13 Pontic Greek deportations and the 1915 Armenian genocide, Yazidis were also driven out from their lands. Throughout the history of republican Turkey, all methods have been tried to Islamize the Yazidis. Before 1915, for instance, Suruç was an entirely Yazidi town. So was the town of Viranşehir. Today, there is not a single Yazidi left in Suruç. Furthermore, the Islamized Yazidis can be seen exhibit insulting behavior towards those who remain Yazidis.”

Yazidis say they have been subjected to 72 attempts at extermination, or attempted genocide since the seventh century. “In 630 AD, the Muslims started a series of wars against the Yezidis by killing and abducting many people,” according to the website of the Yezidi Human Rights Organization-International.

“A current ‘incentive’ to the ongoing slaughter is a belief that states that if a Muslim slays a Yezidi, great awards await him or her in Heaven. If a Muslim man slays a Yezidi he is told that he will be rewarded with 72 virgins in the next world. Unless such ‘incentives’ cease and this senseless killing is stopped, the Yezidis could face permanent extinction. If this happens, the world will not only lose a very peaceful and unbiased people, but an irreplaceable link to its past.”

Today, Yazidis are the victims of the 73rd attempted genocide in the Shengal region, the Yazidi homeland in Iraq, at the hands of Islamic State (ISIS) jihadists.  “About 30,000 Yazidis from Iraq fled to Turkey following the ISIS massacres in Shengal in 2014. Today, the estimated number of Iraqi Yazidis in Turkey is 1500,” said Barış.

The republic of Turkey, founded in 1923, has for decades exposed Yazidis to widespread persecution. According to the 2014 book Begê, the Immortal Saint of Yazidi Kurds by the researcher Yaşar Batman, among the measures the Turkish state has taken in an attempt to erase the collective memory of Yazidis are:

“The greatest problem of Yazidis in Turkey is that the government does not recognize their existence,” emphasized Barış.

The history of the Islamization of today’s “Muslim world” is a history of genocide and persecution in which several brutal methods were systematically used to Islamize non-Muslim populations.

Approximately 80,000 Yazidis lived in Turkey until the 1970s. But the majority of Yazidis migrated from Turkey to Europe in the 1980s and 1990s, due to the continued persecution and pressures they faced. “After they moved to Europe, even their private registered lands were invaded. Their trees were ripped off. The Yazidi owners of those lands were threatened, and some of their villages were abandoned and became uninhabitable places,” read a 2014 parliamentary motion.

Many Yazidis have been forcibly Islamized throughout centuries, but the truth is that former Yazidis, like the ancestors of the clear majority of Muslims, did not become Muslim of their own free will.

All Muslims should be encouraged to investigate the true history of how their communities were Islamized.  The ancestors of today’s Muslims were once non-Muslim – they were Christian, Jewish, Buddhist, Hindu, Pagan, Yazidi, Zoroastrian, or Shamanist, etc.

The history of the Islamization of today’s “Muslim world” is a history of genocide and persecution in which several brutal methods were systematically used to Islamize non-Muslim populations – such as slaughters, rapes, kidnappings, sexual slavery and forced conversions, among others.

Muslims – particularly those who claim that “Islam is a religion of peace” – should be asked this vital question:

How did your ancestors become Muslim?