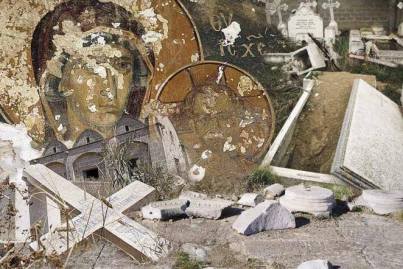 “Turkey has been committing two major international crimes against Cyprus. It has invaded and divided a small, weak but modern and independent European state (since 1 May 2004 the Republic of Cyprus has been a member of the EU); Turkey has also changed the demographic character of the island and has devoted itself to the systematic destruction and obliteration of the cultural heritage of the areas under its military control. Thus, in addition to the human, social ethnological and economic consequences, Turkey’s aggression -its invasion and occupation- has brought about a systematic, large-scale cultural destruction which, unfortunately, is irreversible. This is one of the most tragic aspects of the Cyprus problem and is also clear proof of the determination of Ankara to “Turkify” the occupied area and to maintain a permanent presence in Cyprus.

The occupying power and its puppet regime, from 1974 until today, have been working methodically to erase everything that is Greek and/ or Christian from occupied Cyprus. British journalist John Fielding, who documented much of this cultural eradication for television two years after Turkey’s invasion of Cyprus, wrote, “the vandalism and desecration are so methodical and so widespread that they amount to institutional obliteration of everything sacred to a Greek.” (“The Rape of Northern Cyprus,” The Guardian, 6 May 1976).”

“The churches have been subject to the most violent and systematic desecration and destruction. More than 500 churches and monasteries have been looted or destroyed: more than 15,000 icons of saints, innumerable sacred liturgical vessels, gospels and other objects of great value have literally vanished. A few churches have met a diff erent fate and have been turned into mosques, museums, places of entertainment or even hotels, like the church of Ayia Anastasia in Lapithos. At least three monasteries have been turned into barracks for the Turkish army (Ayios Chrysostomos in the Pentadactylos Mountains, Acheropoiitos in Karavas and Ayios Panteleimonas in Myrtou). Marvelous Byzantine wall-paintings and mosaics of rare artistic and historical value have been removed from church walls by Turkish smugglers and sold illegally in America, Europe and Japan. Many Byzantine churches have suff ered irreparable damage, and many cemeteries have been desecrated or destroyed.”

“The Turkish army of occupation continues to exert complete military, fi nancial and political control in the occupied northern part of the island, preventing the Government of the Republic of Cyprus from maintaining and protecting the archaeological sites – it even prevents UNESCO from taking care of archaeological monuments of prehistoric and historic antiquity, as well as Byzantine and other cultural treasures, for the purpose of restoring them to the extent possible.”